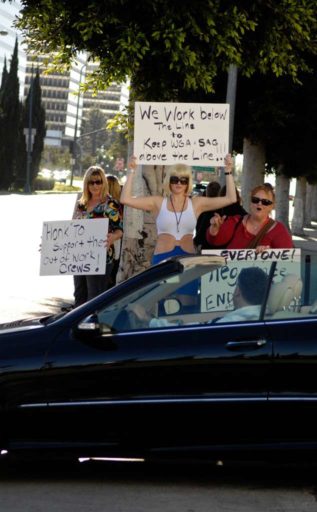 There’s nothing quite like that night in January when the worlds of film and TV collide under one roof in the ballroom of the Beverly Hilton hotel, a magical place with the champagne flows freely and literally anything can happen. And we do mean anything.

Before we see what co-hosts Andy Samberg and Sandra Oh, re-teaming after a stellar presenting bit at last year’s Emmys, have in store for us at this year’s 76th Golden Globe Awards, which winners will surprise us with a delightfully drunken acceptance and which losers might surprise us with a stunning moment of poor sportsmanship, it’s worth taking a look back at all the craziness that’s come our way over the last 75 years.

From missing winners to drunk presenters, confusing speeches to dips in the pool, the Hollywood Foreign Press Association’s annual party has been the epicenter for one wild moment after the next.

Without further ado, these are the craziest moments in Golden Globes history!

The Year Without a Show

Thanks to the lengthy Writer’s Guild of America strike, there was no show in 2008. Instead, the winners were read in a news conference at the hotel and NBC padded the programming time with a special two-hour Dateline that included interviews with the nominees and commentary from Kathy Griffin. 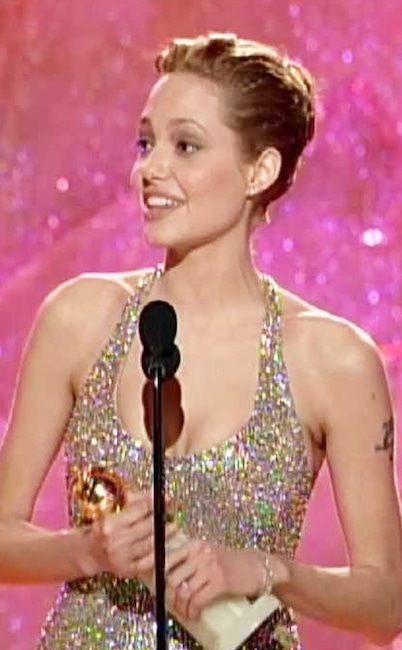 In 1999, Angelina Jolie swore that if Gia won any awards at that year’s ceremony, she’d jump in the pool at the Beverly Hilton Hotel afterwards. So, when she took home Best Actress in a Mini-Series or TV Movie for her work in the HBO film, she did just that. And she pulled a journalist trying to interview her as she was still in the pool in with her for good measure. 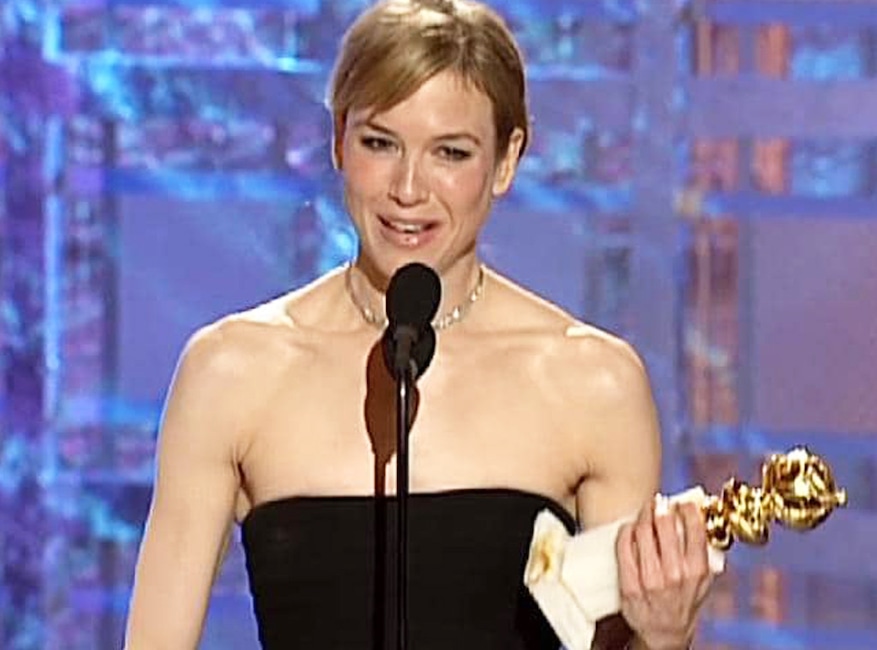 When Hugh Grant announced Renee Zellweger as the winner for Best Actress in a Musical or Comedy at the 2001 ceremony, the actress was nowhere to be find. As he started to accept on her behalf, she rushed the stage and regaled the audience with a wild tale about being in the bathroom wiping lipstick off her teeth when her name was called. Even wilder? She won for Nurse Betty. 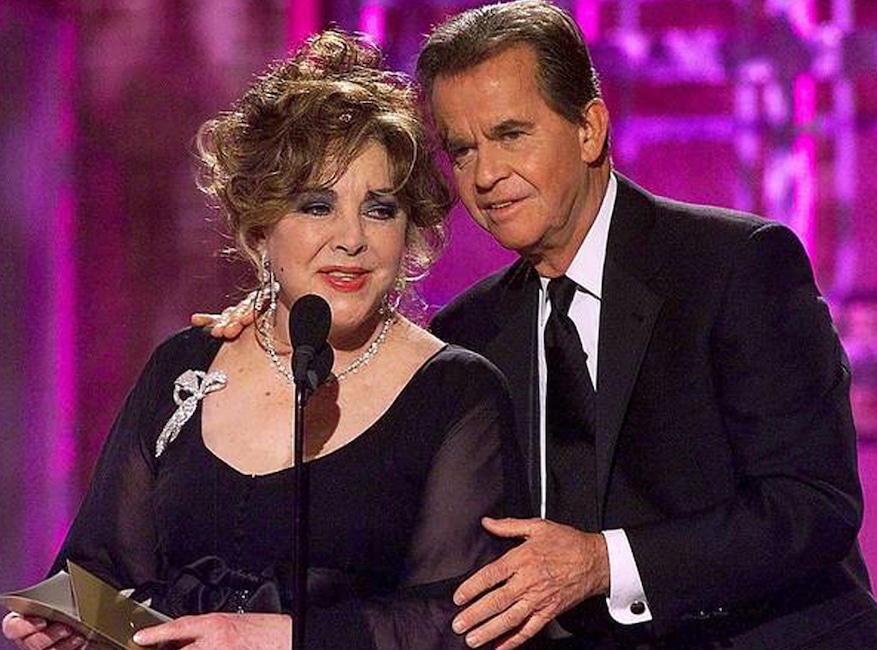 When Elizabeth Taylor took the stage in 2001 to announce the winner for Best Drama Picture, it was clear something was wrong with the Hollywood legend’s state of mind as she stumbled over her script. And when she began to open the envelope before even reading the nominees, it became even clearer. “I don’t open this?” she asked as the crowd began shouting from their seats to stop her in her tracks. “I just read it from up there? I’m new at this. I usually like to get them.” Thankfully, Dick Clark arrived on stage to help her out and got the show back on track. Jack Nicholson can get away with just about anything, as his habit of always wearing sunglasses inside proves. So when he took the stage in 2003 to accept the award for Best Actor in a Motion Picture Drama, he not only called out the decision to include his film About Schmidt in the category when he felt it was a comedy, but admitted to everyone that he’d popped a Valium. Never change, Jack.

Stepping onto the stage as the host of 2018’s ceremony, Seth Meyers did not have an easy task ahead of him. With Hollywood in the early days of a turbulent reckoning in the aftermath of the Harvey Weinstein allegations, among many others, and the presence of Time’s Up on the red carpet, would the Late Night host tackle the elephant in the room or ignore it altogether? We got our answer immediately as his monologue took on Weinstein—”Don’t worry, he’ll be back in 20 years when he becomes the first person ever booed during the ‘In Memoriam'”—and Kevin Spacey. “They’re going to do another season of House of Cards. Is Christopher Plummer available for that, too?” he asked. “I hope he can do a Southern accent because Kevin Spacey sure couldn’t.” 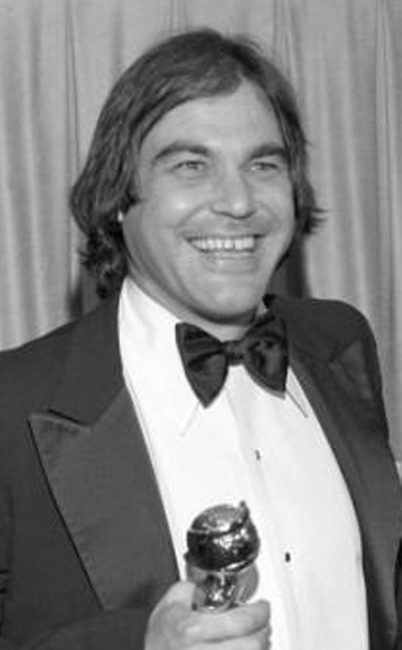 While accepting his Best Screenwriting award for Midnight Express in 1979, famed writer-director Oliver Stone used his moment to rant against the United States’ drug policy. The crowd’s response was not kind and host Chevy Chase came out, suggesting he “just say ‘thank you’ and leave the stage.” However, he did not and had to be escorted off stage by security guards.

What, exactly, was Brendan Fraser laughing about in 2010 when he gifted the world this sublimely goofy gif? Allow him to explain: “The truth was I wasn’t presenting so it was just my job to sit there and have a good time,” he told George Lopez days after the ceremony. “The thing is you sit there, and there are cameras everywhere, and you’re there with your friends… all of a sudden there’s a red light and I just spazzed.” 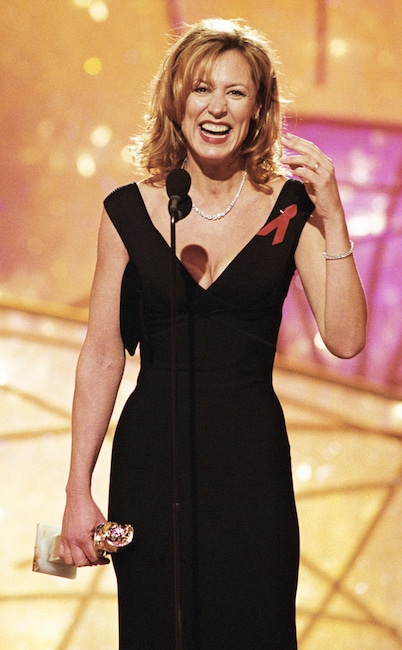 Before Renee Zellweger was MIA, Chicago Hope actress Christina Lahti introduced the Beverly Hilton to the poorly-timed bathroom break in 1998 when she won the award for Best Actress in a Drama Series and had to race her way to the stage in one of the most comical moments to come out of the Golden Globes ever. 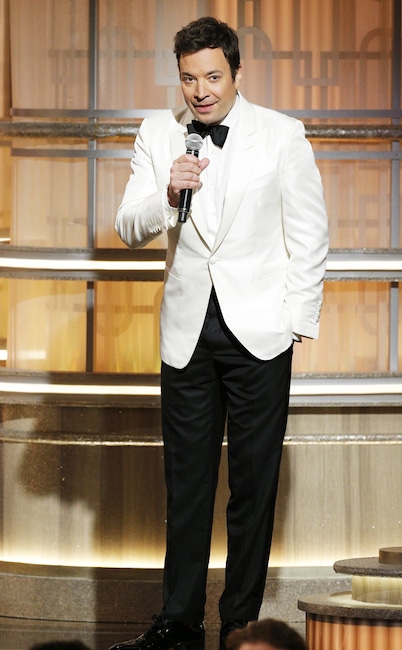 When Jimmy Fallon took the stage for his hosting gig in 2017, the Tonight Show host was immediately forced to rely on his natural charm and comedy instincts when the teleprompter failed him from the jump. After offering to perform impressions, producers got things back on track and the show back on the road. 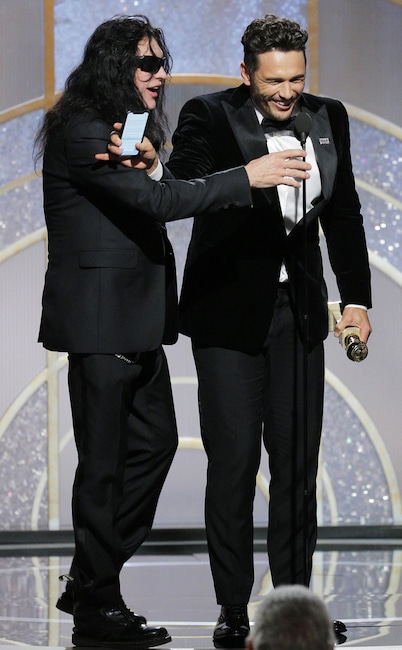 When James Franco took the stage to accept the award for Best Actor in a Musical or Comedy at the 2018 ceremony for his work in The Disaster Artist, he invited the larger-than-life personality who inspired his role, Tommy Wiseau, on stage to join him. But when the guy made a bold move for the microphone, Franco quickly gave him a stiff arm and made sure he knew he was there to be seen and definitely not heard. 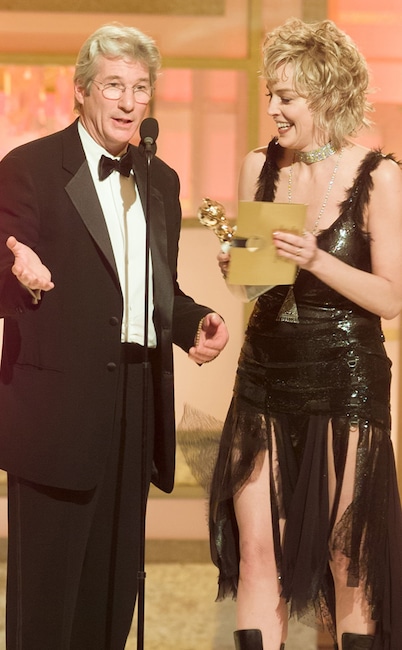 When Richard Gere took the stage in 2003 to accept his trophy for his work as Billy Flynn in Chicago, presenter Sharon Stone bizarrely continued to insert herself in his moment, clearly forgetting that acceptance speeches tend to be a one-man show. When Meryl Streep does something, you know she’s going to do it well. And that was the case when she took the stage in 2012 to accept her 528336th trophy in her career for her work in The Iron Lady. As she realized, mid-speech, that she’d forgotten her glasses, she let out one, long utterance of the word “s–t” hat was truly something to behold. 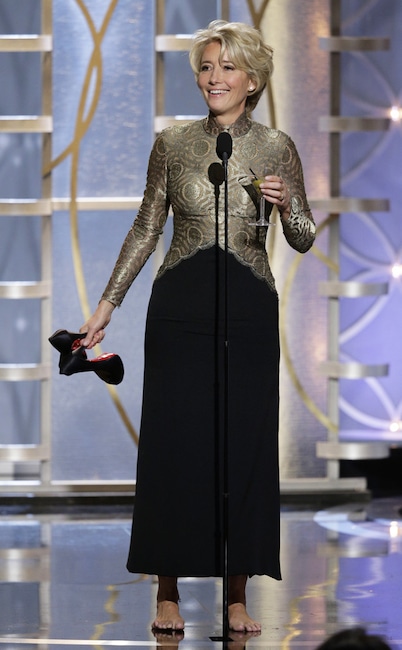 In 2014, Emma Thompson arrived on stage ready to present the award for Best Screenplay, she did so with her shoes in one hand and her martini (perhaps one of many) in the other.  “I just want you to know, this red, it’s my blood,” she said about the bottom of her Louboutins before someone arrived on stage to hand her the envelope, which was all it took for her to toss those bloody shoes over her shoulder and get on with it.

If at first you don’t succeed, try and try again. That was Nicole Kidman‘s motto at the 2018 ceremony when, while rising to accept her award for Best Actress in a Limited Series for her work in Big Little Lies, she had quite a journey finding husband Keith Urban‘s face. 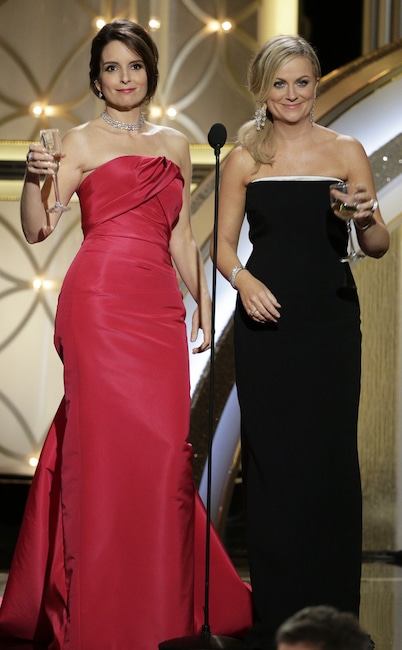 In their second of three consecutive co-hosting appearances, our favorite funny ladies Tina Fey and Amy Poehler decided in 2014 that the time was right to take some of Hollywood’s most notorious bachelors down a peg. Aiming first at George Clooney, Fey joked, “Gravity is nominated for Best Film. It’s the story of how George Clooney would rather float away into space and die then spend one more minute with a woman his own age.” Later in the show, she had a new target: “And now, like a supermodel’s vagina, let’s all give a warm welcome to Leonardo DiCaprio.” 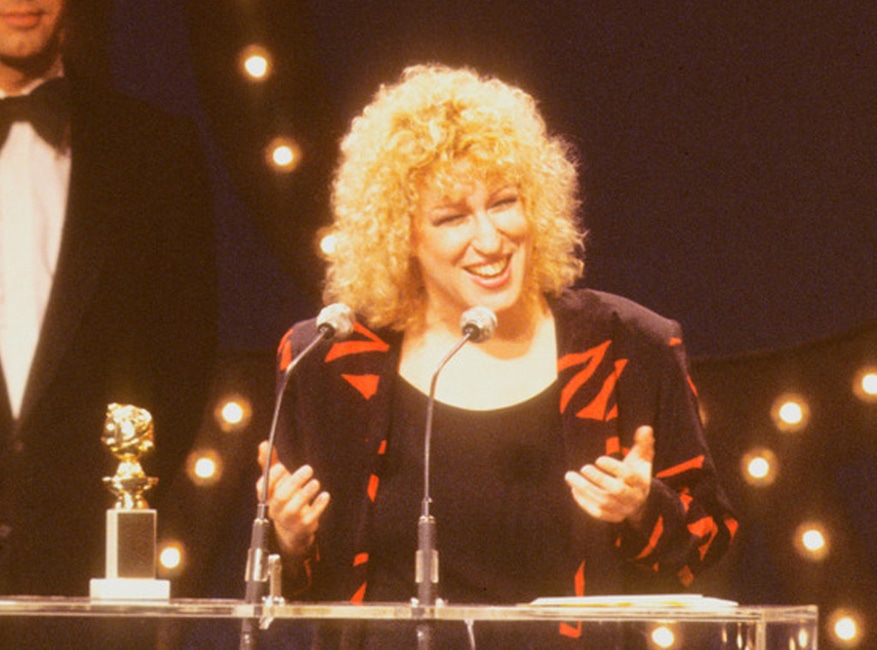 When Bette Midler took the stage in 1980 to accept her trophy for The Rose, she scored some major laughs with her speech. “I’m reminded of when Joan Crawford actually won her Golden Globe and she said—I can’t do it, I can’t! I have to be tasteful, they told me!—She said, ‘I’ll show you a pair of golden globes,'” she quipped before trying to put the trophy into her mouth! 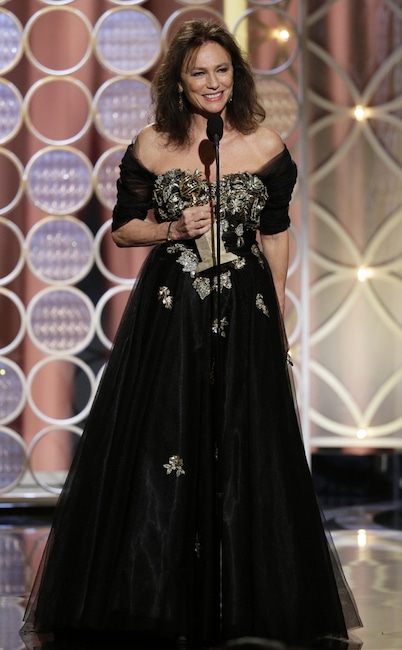 When Jacqueline Bisset won in 2014 for Dancing on the Edge, her speech left everyone at home wondering exactly what was going on. Visibly touched and overwhelmed, she rambled on, making little sense, ignored the cutoff music, and then left the audience with this piece of advice: “I believe, if you want to look good, you’ve got to forgive everybody. You have to forgive everybody—it’s the best beauty treatment.” 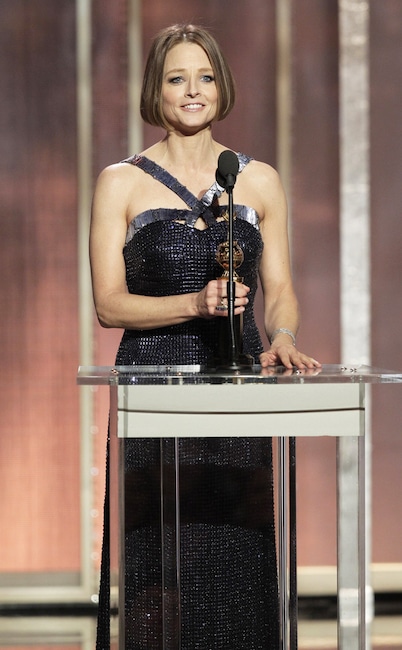 While accepting the Cecile B. DeMille Lifetime Achievement award in 2013, Jodie Foster delivered a nearly seven-minute long speech in which she appeared to confirm she was a lesbian—although not in as many words. “I guess I have a sudden urge to say something that I’ve never really been able to air in public,” she began. “But I’m just going to put it out there, right? Loud and proud, right? So I’m going to need your support on this. I am…single.” She then referenced “coming out” to family and friends “about 1,000 years back in the Stone Age,” before saying that she valued “privacy above all else” as a way of admonishing the curiosity into her private life that had surrounded her for years. Message received, Jodie!

When Lady Gaga pulled out a surprise win for Best Actress in a Limited Series or TV Movie at the 2016 Golden Globes for her work in American Horror Story: Hotel, a brush with Leonardo DiCaprio on the way to the stage seemed to catch the actor in quite a shady moment. However, while chatting with ITV’s This Morning a few days later, he cleared the air, explaining what really happened. “We were laughing about that afterwards,” DiCaprio explained. “I actually had no idea who was passing me or what was going on, but that was a funny little bit that went around… we were laughing at it at the after party! It’s amazing what goes viral these days, I guess I’m of a different generation now. I have no idea where this stuff comes from or how it’s even captured!” 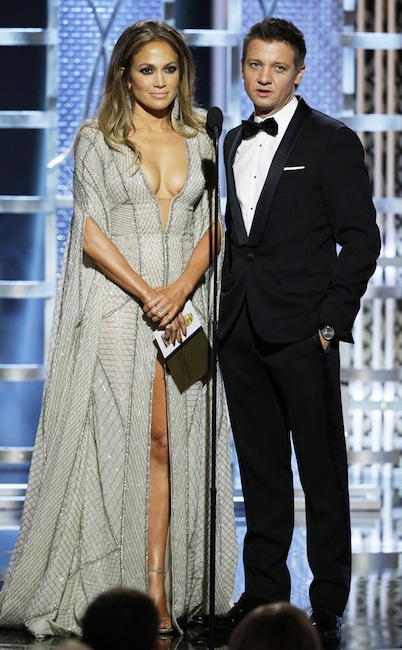 When presenting the award for Best Drama Miniseries at the 2015 ceremony, Jeremy Renner had the crowd gasping when, after co-presenter Jennifer Lopez asked if she should open the envelope because “I’ve got the nails,” he peeked at her plunging neckline and joked, “You’ve got the globes, too.” 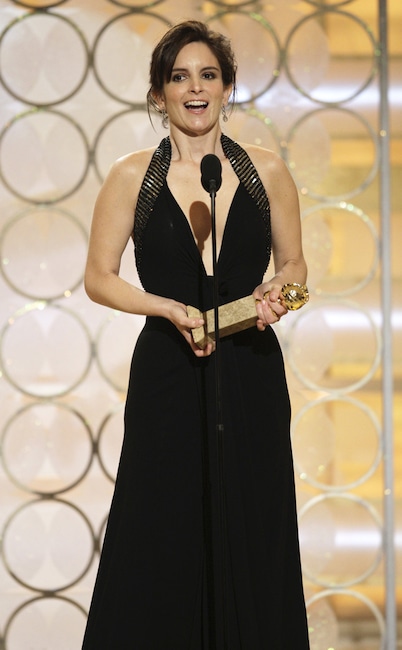 Tina Fey Takes on Her Haters

When accepting the award for Best Actress in a TV Series—Musical or Comedy in 2009, Tina Fey made sure to give a special shout out to the internet trolls who’d been giving her virtual hell. “BabsonLacrosse, you can suck it. DianeFan, you can suck it. CougarLetter, you can really suck it because all year you’ve been after me all year. And to my husband Jeff,” she said, before pausing for dramatic effect. “I love you very much.” 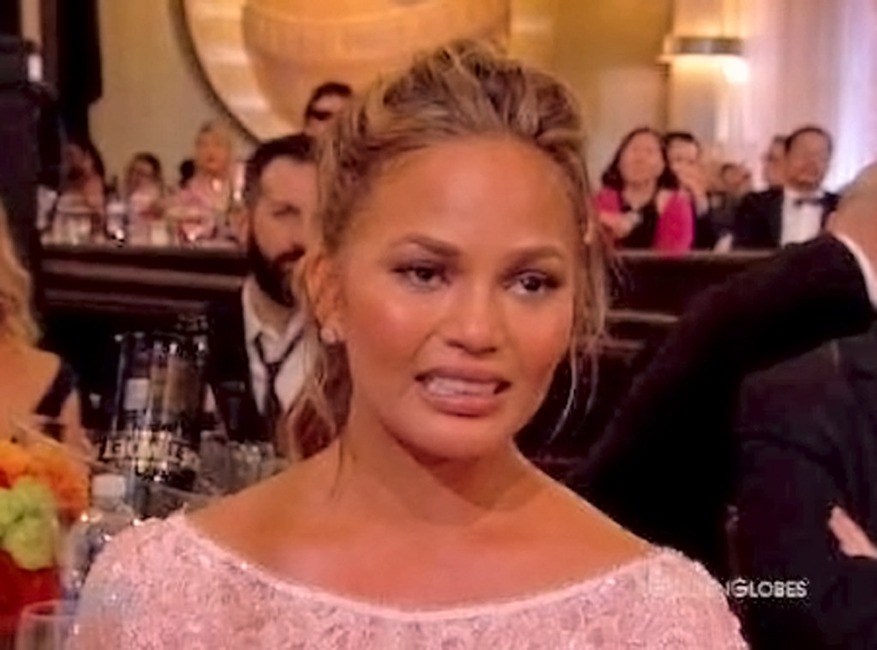 Why, exactly, was Chrissy Teigen making this face while husband John Legend was accepting his award for Best Original Song alongside Common at the 2015 ceremony? “Sorry I don’t practice my cry face okay,” she tweeted afterwards. 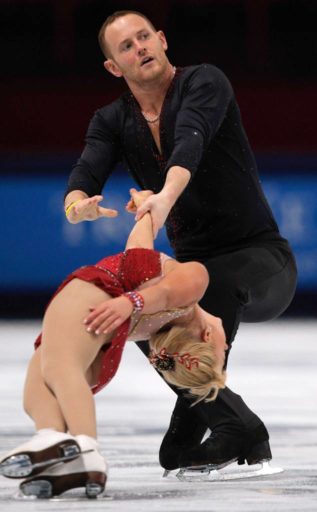 Celebs You Forgot Were On Law & Order: SVU