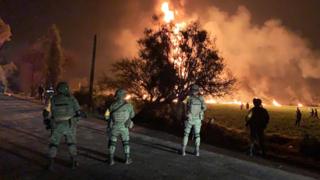 At least 21 people have been killed and 71 more injured in an explosion at an oil pipeline in Mexico.

It is believed the blast occurred after the line was ruptured by suspected oil thieves in the town of Tlahuelilpan, in Hidalgo state.

Officials say dozens of people had been scrambling to fill up containers when fire broke out on Friday evening.

Footage on local television showed large flames and people at the scene with severe burns.

Fuel theft, known locally as “huachicoleo” (or moonshining) is rampant in some Mexican communities.

The government has said the practice cost the country about $3bn (£2.3bn) last year.

Pemex, Mexico’s state-owned petroleum company, said in a statement that the fire was caused by illegal tapping.

Thousands of marines have been deployed to guard pipelines and transport has been shut down altogether in places.

The policy has led to increased reliance on tanker deliveries and there have been widespread reports of fuel shortages and long lines at petrol stations across the country.

Hidalgo state governor, Omar Fayad, has warned the number of casualties may rise as further searches are carried out.

The AFP news agency reports that some locals at the fire site blamed shortages for the tragedy.

“A lot of people arrived with their jerry cans, because of the gasoline shortages we’ve had,” resident Martin Trejo told AFP.

The 55-year-old was at the scene looking for his son who had gone to collect fuel.

After the blast, Mr Fayad issued a plea on Twitter to try and avoid further disasters.

“I urge the entire population not to be complicit in fuel theft,” Mr Fayad posted (in Spanish). “Apart from being illegal, it puts your life and those of your families at risk.

“What happened today in Tlahuelilpan should not be repeated.”

President López Obrador travelled to the scene in the early hours of hours of Saturday.

In an interview with local media, he vowed to press on with his anti-theft policy until it was eradicated.

“Rather than stopping the strategy, the fight against the illegality and theft of fuel, it will be strengthened,” he said.

Pemex has suffered a number of other deadly accidents in the past.

At least 37 people were killed in an explosion at its Mexico City headquarters in 2013 and another 26 died in a fire at a gas facility in 2012. 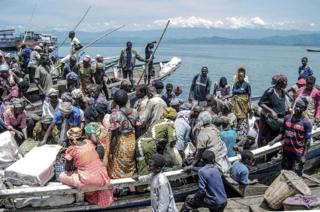 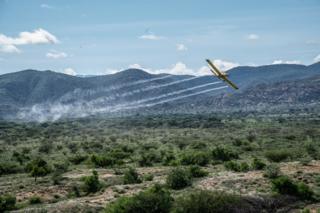 On patrol with Kenya’s locust hunters 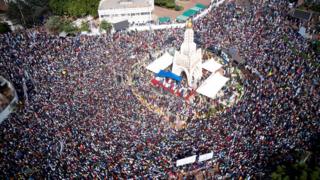