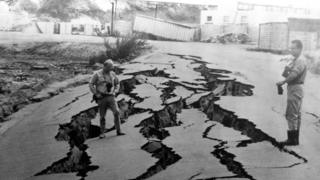 The quake and the massive landslides it triggered killed approximately 70,000 people.

A wall of ice came loose from Peru’s highest mountain, Mount Huascarán, careered down the mountain at incredibly speed and buried the town of Yungay.

A statue of Christ in the town’s cemetery and four palm trees were all that remained of Yungay.

In nearby Ranrahirca, 20,000 people were killed, leaving only 400 survivors.

It was not the first time Ranrahirca had been devastated. Only eight years earlier, 2,000 people had been killed in a similar landslide which also devastated seven more neighbouring towns.

But the 1970 quake, which has since become known as the Great Peruvian Earthquake, eclipsed that of 1962.

The worst-affected areas were Ancash and La Libertad in Peru, but the tremors could be felt as far away as Brazil.

Houses built from adobe, such as these in Huaraz, the capital of the Ancash region, could not withstand these forces of nature.

The epicentre of the earthquake was located 35km off the coast of Casma and Chimbote on the Pacific Ocean, where the Nazca Plate meets the South American Plate.

The 7.9-magnitude quake struck on a Sunday afternoon at 15:23 local time and lasted 45 seconds.

But it was the landslides which followed which caused much of the damage. Their force was such that a lorry and a bus could barely been made out after they had been swept along by the mudslide.

A boulder estimated to have weighed 700 tonnes was swept along and came to rest near Ranrahirca.

Arial photographs showed the size of slide of glacial ice and rocks which careered down the mountain at an average speed of 160kmh (100mph).

The landslide piled mounds of debris up to 15m high – as pointed out by the arrows in the photograph below – and the melted ice from the glacier formed small lakes.

Homes and businesses, such as the power company which used to stand on the site pictured below, were completely destroyed.

The wave of mud and debris was 20m deep at this point and swept away the homes which had stood in the foreground of the picture. The fence posts in the foreground are bent in the direction of the flow of the mudslide.

With 50,000 people killed, 20,000 missing and presumed dead, and another 150,000 injured, the Great Peruvian Earthquake is considered one of the world’s most destructive quakes to this day.

All pictures subject to copyright. 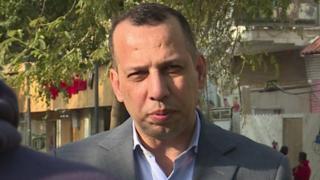 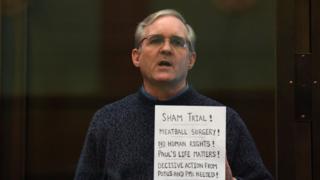 US ex-marine Paul Whelan will not appeal Russian spying sentence