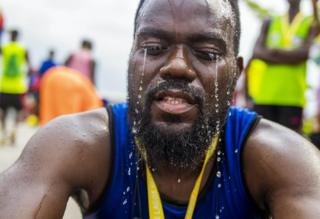 Major sections of the notoriously clogged streets of Nigeria’s commercial hub, Lagos, were closed to traffic to make way for the estimated 10,000 runners on Saturday taking part in the marathon and 10km (6.2 miles) races.

A rain shower just before the 06:30 local time (05:30 GMT) start cooled things down but with the temperature at 26C and humidity increasing the conditions proved punishing for the athletes.

The marathon route, for this fourth edition of the race, included a gruelling shade-less 11km stretch across the Third Mainland Bridge that links mainland Lagos to a series of islands.

It ended more than 20km later at Eko Atlantic – a stretch of land reclaimed from the sea.

The elite race attracted athletes from East Africa, with Ethiopians and Kenyans taking the top spots in the men’s and women’s races.

Live music performances and cheerleaders tried to boost the morale as the athletes approached the end of the run.

While some still seemed to be bouncing along comfortably as they got to the finish line, others were clearly struggling.

Many were relieved to have got to the end.

The recovery tent was not only for the less well-conditioned runners, some of the elite athletes also need help.

The top-placed athletes all received large cash prizes. The winners of the men’s and women’s races each got $50,000 (£38,000) and the first Nigerians to cross the line also got money and a plot of land.

But everyone who took part received a commemorative medal.

Pictures by Grace Ekpu and words by Damian Zane, BBC 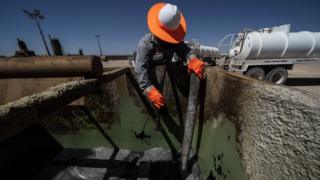 Oil collapse: ‘Right now everything I have is shut down’ 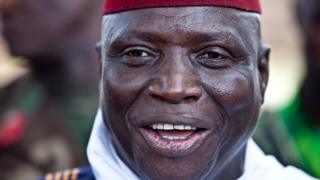 Gambian man charged in US with torture of coup plotters