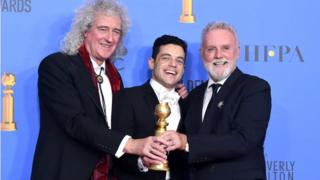 The Freddie Mercury biopic took home the trophies for best film drama and best drama actor for its star Rami Malek, who played the late frontman.

Despite being heavily tipped and nominated for five prizes, A Star Is Born took home just one award – best original song for Shallow.

Set in the 1960s and co-starring Viggo Mortensen, Green Book tells the story of an African-American musician who hires an Italian-American driver to take him on a tour of the Deep South.

Its Golden Globes victories mark it out as one of the favourites for next month’s Oscars.

Its original director Bryan Singer was fired from the film due to “unreliable behaviour” amid reports that he had clashed with Malek on set. Dexter Fletcher was brought in to complete the project.

But it has been a box office hit and Malek will now be among the favourites to win best actor at the Oscars on 24 February.

In his acceptance speech on Sunday, Malek did not thank Singer, but instead paid tribute to Queen and said he was “beyond moved” to have won.

“To you, Brian May, to you, Roger Taylor, for ensuring that authenticity remains in the world,” he said. Both May and Taylor attended the ceremony.

He dedicated the award to Mercury, who died in 1991, adding: “This is for and because of you, gorgeous!”

One of the night’s other big surprises in the film categories was Glenn Close winning best drama actress for her role in The Wife.

She beat off competition from Lady Gaga, who had been widely expected to win for A Star Is Born.

In an impassioned speech, Close spoke about the importance of women following their dreams and not just looking after their home lives.

She said: “Women, we are nurturers, that is what is expected of us. We have our husband and our children and we have to find personal fulfilment and follow our dreams and we have to say, ‘I can do that’ and, ‘I should be allowed to do that’.”

The British winners included Olivia Colman, who won best actress (comedy or musical) for her portrayal of Queen Anne in The Favourite.

Christian Bale was also rewarded for his role as former vice president Dick Cheney – which scooped him best actor (comedy or musical).

In the other TV categories, The Americans was named best drama and The Kominsky Method picked up best TV comedy. The Netflix show’s star Michael Douglas won best actor in a TV series (musical or comedy) for playing an ageing acting coach.

He dedicated his award to his “extraordinary, wonderful wife Catherine” – that’s Catherine Zeta Jones – and his 102-year-old father Kirk.

The award came 49 years after he received his first Golden Globe nomination for best male newcomer.

Sandra Oh won best actress in a TV drama for Killing Eve, the unconventional crime drama that started out on BBC America. She thanked her Korean parents, who were seated in the audience, in an emotional acceptance speech. 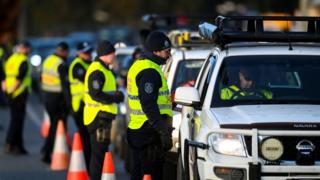 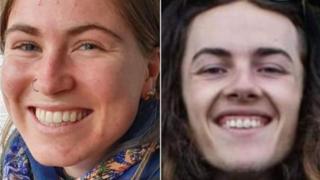 Walkers found after 19 days in the New Zealand wilderness 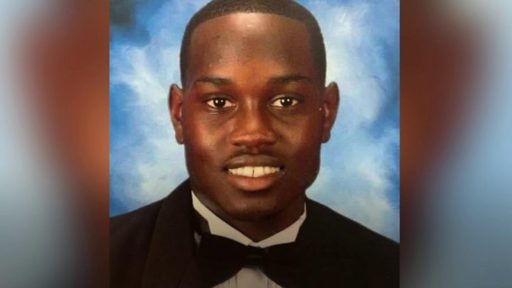