The group also criticised the Governor over his “systemic blackmail” targeted at the Independent National Electoral Commission (INEC).

CGCPC accused Wike of plans to cause violence in the state during the March 9 governorship election, just as they dissociated themselves from endorsing Wike as a sole candidate for the election.

This was contained in a statement issued by Pastor Warigbani Ezekiel Zebulun, the CGCPC Chairman and APDA governorship candidate, and Honourable Chibuzor Anele, the CGCPC Secretary, on Monday.

The CGCPC said they had studied the political terrain and recent events in Rivers State and had “frowned at them”.

As such, they took the following decisions: “That we wholeheartedly disassociate ourselves from the concocted, misguided and shameful endorsement of Barr. Nyesom Wike as sole governorship candidate by a purported coalition of 58 political parties. Such endorsement is watery and belated.

“We call on Gov. Nyesom Wike and the PDP to be very careful in the systematic blackmail they are launching on the electoral umpire, INEC. It is very worrisome that the PDP will be casting aspersions on the integrity of INEC. It is on record that the PDP has made several attempts to compromise INEC. These acts can best be described as the ‘The Voice of Jacob, the Hands of Esau’.

“We are using this opportunity to call on INEC to maintain its neutrality in the forthcoming governorship and state Assembly elections in Rivers State.

“We condemn in strong terms the unholy marriage between the Supreme Court as well as Justice Abdul Kafarati of the Federal High Court in receiving Rivers people’s money from Barr.Nyesom Wike. Rivers money is used by the Governor in exchange for expensive rings and bride price to cement and extend his tenure as Governor of Rivers State, which comes to an end on 29th May, 2019, through the back door. We call on the Federal Government and the EFCC to, with immediate effect, institute a panel with the aim of uncovering and recovering all looted funds. Details and records will be made available in the process.

“We commend the Nigerian Army and the GOC 6 Division , Major General Jamil Sarham, for coming to the rescue of defenceless Rivers citizens, especially those in Abonnema who were held hostage by hoodlums and thugs loyal to PDP. The question Wike and the PDP should answer is: ‘What is their relationship with the characters that are on the wanted list of the Nigerian Army?’

“We have also observed with great pains the existing feud between the Rivers State Government and the Federal Government. This senseless confrontation orchestrated by Governor Wike has lasted for nearly four years. In this case, our beloved State and her people suffers. Consequently we call on Rivers people to support and vote their preferred governorship candidate, who can work in harmony with the Federal Government to bring the desired dividends that will make our beloved state a safe haven as ‘The Treasure Base of the Nation’.

“Discreet information reaching us reveals that the PDP-led government in Rivers State has acquired illegal arms and ammunition and have distributed same to various local government areas of the state to scuttle the forthcoming governorship and state House elections through violence and maim-marked political opponents in the state. We, therefore, call on the Nigerian Police and her sister agencies to set out their dragnets and swiftly go into action with a view to apprehending and prosecuting the culprits.

“To this end, we call on Rivers people (men and women) to prevent children and their wards from being used as agents of violence before and after the governorship and state House of Assembly elections in the state. Enough is Enough! Those who want to put the children of others in harm’s way should first bring their relations and children to the forefront.

“Finally, we commiserate with the families of those that lost their lives in the course of the presidential and National Assembly elections in the state. We pray the Almighty God will comfort them.” 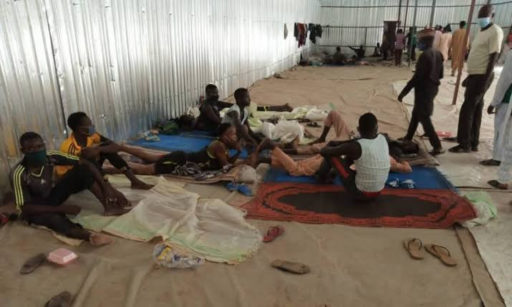