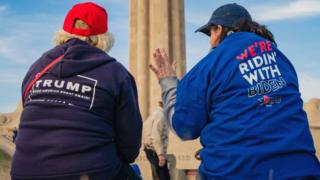 As the US grapples with the coronavirus outbreak, President Donald Trump and and his likely election rival, Joe Biden, have been locking horns over the handling of the crisis.

They’ve traded accusations about access to China for US health experts, and restrictions on flights from China following the outbreak.

We’ve been looking at some of these claims and counter-claims.

Mr Biden has said there was “no effort” by the president to get US officials into China to inspect the initial outbreak, and also claimed that “Trump never got a CDC team on the ground in China.”

But the Trump administration says it did try.

Health Secretary Alex Azar told journalists in late January that the US had offered on 6 January to send a team from the US Centers for Disease Control and Prevention (CDC) – an offer that was repeated later that month and in February.

The CDC is the top government body responsible for protecting public health.

Two US experts did get into China as part of a multinational delegation from the World Health Organization, which went in mid-February.

These were Weigong Zhou from the US CDC, and Clifford Lane from the US National Institute of Allergy and Infectious Diseases.

It’s also worth adding that the CDC itself has had an office in China for decades (more on this further down).

Trump allowed 40,000 people to travel to US from China after the travel ban

President Trump and Mr Biden have also clashed over how airtight the restrictions introduced on travel from China are.

Mr Trump issued an order on 31 January which stopped foreign nationals who had been in China in the previous two weeks from entering the US. This came into effect on 2 February.

An advert by the Biden campaign claims the president let 40,000 travellers into the US from China after he signed the order. President Trump has hit back, saying these were US citizens coming home.

The order does have exemptions for US citizens, legal residents, and non-citizen relatives with close ties.

Flight data analysed by the New York Times shows 40,000 people arrived in the US directly from China in the two months after President Trump’s restrictions.

We don’t know how many of these were US citizens, but it is unlikely they all were – as President Trump claims – with other exemptions also applying.

This claim by Mr Biden refers to the presence of a CDC office inside China, which it’s maintained for decades.

Joe Biden said: “We had over 44, if I’m not mistaken, people from the CDC in China, to observe what was going on. The president brought home the vast majority of them and I think left only four in place.”

Mr Biden is right that overall numbers of CDC staff in China have come down significantly, but he’s not correct about the numbers.

The CDC website says that as of March this year there were 14 staff in total working in China – three from the US and 11 employed locally.

That’s down from 47 CDC staff a year earlier, eight of whom were US employees and 39 of whom were locally recruited.

Mr Biden further alleges that a key US expert role inside China has not been filled.

He said: “We had an American official stationed inside the Chinese disease control agency serving as our eyes and ears. President Trump left the position vacant as the outbreak hit.”

It’s true that the last American – a CDC employee – left her role in China’s disease control agency in 2019 before the coronavirus emerged, and was not replaced.

When President Trump was asked about this on 22 March, he said that media reports about the CDC were “100 percent wrong” and then referred the question to Robert Redfield, the CDC director, who was with him.

Mr Redfield said the CDC “China office is actually being augmented, as we speak,” but didn’t explain why this particular role had ceased.

President Trump claims Mr Biden “went crazy” and called him “xenophobic” for banning people entering the US from China.

When the order was announced, Mr Biden did say it wasn’t the time for “Donald Trump’s record of hysterical xenophobia”, and the next day tweeted a similar message.

The Biden campaign says this wasn’t a reference to the travel restrictions, but to the president’s overall record in office.

He publicly supported the travel ban in early April, with his campaign saying: “Science supported this ban, therefore he did too.”

President Trump has also said Mr Biden wrote him a letter of apology regarding his comments about the China travel restrictions, but this isn’t true, according to the Biden campaign.

Send us your questions 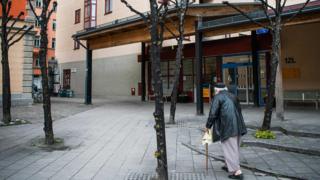 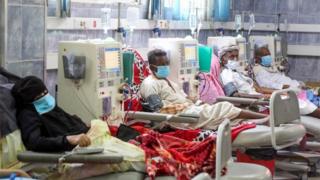 Coronavirus: Five reasons why it is so bad in Yemen 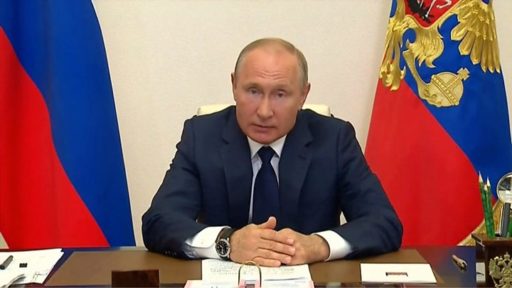 Coronavirus: Is Putin rushing Russia out of lockdown?