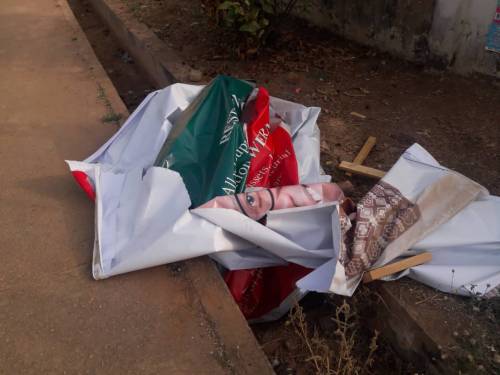 The campaign office of Atiku Abubakar, presidential candidate of the Peoples Democratic Party (PDP) in Akure, the Ondo State capital, was on Wednesday attacked by some hoodlums.

The hoodlums were suspected to be the members of the All Progressives Congress (APC) who were allegedly working under certain instructions.

A Sahara Reporters correspondent learnt that the rampaging hoodlums scaled the fence of the office located along Ijapo Estate Road in Akure and destroyed the billboards and posters bearing Atiku.

Olumide Ogunkua, Personal Assistant to the Ondo State Coordinator of the Atiku Presidential Campaign, confirmed the attack to journalists in Akure, the state capital.

Ogunkua noted that the hoodlums, after entering into the compound of the campaign office, began to chant the APC slogan of ‘Next Level’ and tore the posters of the Atiku/Obi for 2019 President, including other PDP posters of candidates in the state.

He disclosed that the security guard in the compound was molested and beaten before he was tied up by the suspected hoodlums.

“We got a call today from one of our sympathizers that all the billboards, banners and posters in front of our Campaign (Atiku) office have been vandalized and destroyed,” he said.

“We quickly rushed down there and by the time we got in, we all noticed that they had destroyed the poster and removed Alhaji Atiku Abubakar new billboards that we just erected.

“In fact, they tied our security guard for challenging their action and also took his two phones away with all other personal belongings.

“The security guard told us that the hoodlums scaled through the fence and held him hostage before finally perpetrating their dastardly act by destroying the newly-erected boards.

“It indicates the desperation of the ruling party because our guard told us that the hoodlums were shouting the slogan of ‘Next Level’ when they were destroying the bill boards and banners.”

Ogunkua later condemned the action of the hoodlums, saying the attack and vandalism have already been reported to security agencies in the state for investigation.

He added that the Atiku presidential campaign team in the state would write both the Inspector General of Police (IGP) and the Director of the Department of State Service (DSS) to formally report the evil act.

“It is sad and if a stop is not put to, it might be a threat to the peaceful conduct of the general election next month.

Reacting, the APC Publicity Secretary in the state, Comrade Alex Kalejaiye, condemned the attack but denied allegations that the hoodlums were his party members.

“We are so confident of our victory come February 2019, so we won’t have any reason whatsoever to attack any party or their facilities,” he said.

“The state government under the APC controls the signage agency that moderates the activities of setting up billboards, which collects revenue.

“So, why do you think we would now sponsor anyone or group to destroy what brings in revenue in the state government’s purse.  We would never encourage such. If anybody is pointing accusing finger at the APC, the person is doing it out of either frustration or ignorance.”

When contacted, Femi Joseph, the Ondo State Police Public Relations Officer, said the command had not yet been briefed about the attack. 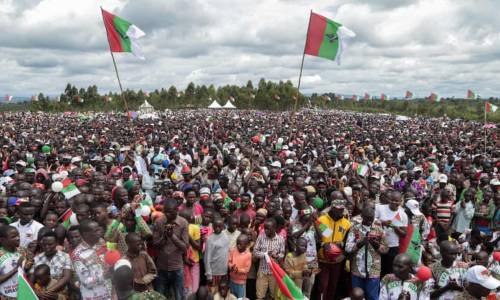 Burundi Expels WHO Officials From Country

Buhari Shuns Oladipo For Head Of Prison Service, Shops For Another Northerner